When Ruby Re-Usable arrived in the Pacific Northwest way back in 1982, she was delighted to discover Viewland/Hoffman Substation, a Seattle public art project that included art created from recycled materials by Emil and Vera Gehrke.  The Gehrkes made whirligigs and windmills out of old coffee pots, cookie tins, fan blades, farm machinery, children’s toys, and all sorts of other cast away materials that they picked up on their car travels.  There are 27 of their spinning creations at the Seattle City Light Substation (Fremont AV North and North 105th St in Seattle, WA), but the whirligigs were originally displayed in the yard of the Gehrke’s north Grand Coulee home, where they welcomed visitors from around the world. 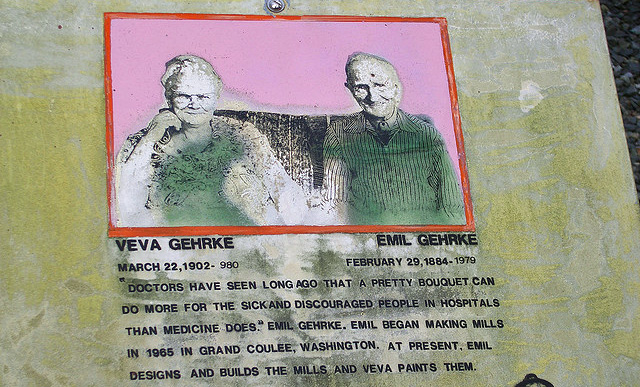 Mr Gherke once said “I wanted to make something pretty for the young people to see.  We throw away too much.  I like to show that practically any object can be reused.” He also explained “Balancing is the secret.  You have to do it in a place where there is no wind.  Old metal pieces, scrap iron, and nuts and bolts hold the pieces together.”  Emil’s wife, Vera, would painstakingly add the colorful paint.

After their deaths in 1979 & 1980, those whirligigs were moved to their present location at North Dam Park on Highway 155/Grand Coulee Avenue in Electric City, WA.  Unfortunately, they are now in a chain-link fenced lot, like an internment camp for wayward windmills.  More pics of the Windmill Garden in Electric City HERE