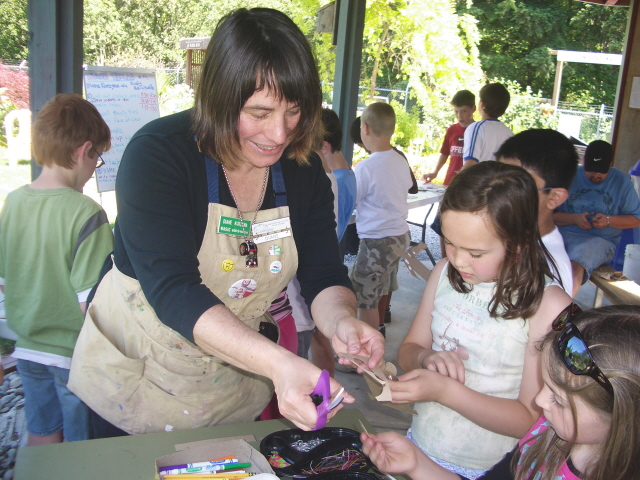 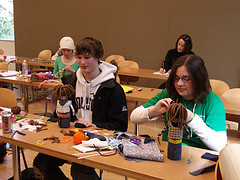 Make Art Not Waste! with  Diane Kurzyna aka Ruby Re-Usable

Honor the many ways people work to protect our environment, especially watersheds and water quality, while learning about the power of art and the importance of recycling. We will use ordinary materials that usually get discarded to create figures that represent the positive actions we can take to enhance environmental quality.

More info about the 16th Student GREEN Congress in The Olympian:

Schools from as far away as Eatonville participate in gathering

The gathering was the culmination of school field trips and lessons on the environments of Puget Sound and the Nisqually River.

Students from districts as close as Olympia, North Thurston and Tumwater, and as far away as Eatonville, visited local streams and lakes and Puget Sound in the past six months to test water-quality measures, such as turbidity, dissolved oxygen, fecal coliform bacteria and number of insects.

“They get watershed education, learn about water-quality monitoring, and some have near-shore field trips,” GREEN program coordinator Anne Mills said.

During “State of the Rivers” breakout sessions, students discussed their findings, such as high levels of coliform or high levels of nitrates and ways to solve the problems, such as picking up after dogs, fixing septic tanks and planting native plants near streams.

Keadrin Dick, 12, a sixth-grader at Lacey Elementary School, said comparing notes with other students gave her a bigger picture of the local environment.

“We can see how our information connects with each other,” she said.

Sydney Robertson, 11, a sixth-grader at Horizons Intermediate School, said the variations in the measurements were interesting.

“Not every site was the same,” she said. “There is different pollution that goes on at different sites.”

More than 1,200 students annually from elementary to college age are involved in the testing, according to information from South Sound GREEN, the watershed education program that is part of the Thurston Conservation District.

Eight delegates and two alternates are chosen by each participating teacher.

The participants also spent the afternoon in a variety of environment-related workshops, with topics such as building a backyard bird habitat, totem carving and fly fishing.

Mills said the entire project matches many state goals in science education, by giving them hands-on experience in a natural environment.

The project also connects the dots between what students learn with their water testing and the state of their local environment.

“Our goal is to develop steward-citizens,” she said. “Instead of preaching in a classroom, we”re getting them connected with their own watershed.”

Venice Buhain covers education for The Olympian. She can be reached at 360-754-5445 or vbuhain@theolympian.com.