Continuing our recap of the Seattle RE Store’s 10th Annual Trash Fashion Show, we now present Ruby Re-Usable‘s Salute to the Red, White and Blue: 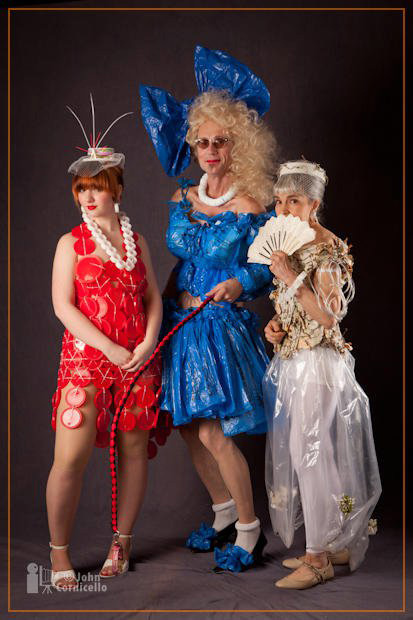 The theme for this year’s Trash Fashion show was Plastics Pollution, inviting (but not requiring) artists to incorporate materials or references to plastics pollution.  Designers are required to submit work that is entirely or primarily composed of at least 90% materials that would have otherwise been disposed into the waste streams.  Ruby believes it is our patriotic duty to reduce the amount of trash we dispose of in order to keep America beautiful (and, of course, for the love of our mother Earth).  She unfortunately has lots of plastic, along with other readily available junk, at her disposal.  Fortunately, she has found some creative ways to reuse some of those throwaways. 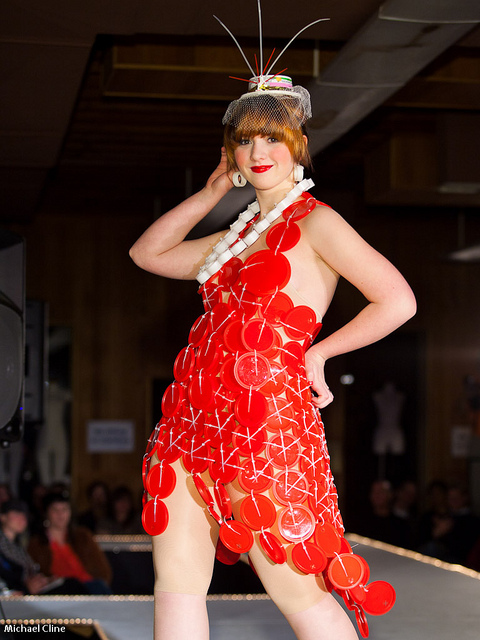 Ruby Re-Usable nearly flipped her lid and was seeing red when she realized how much plastic waste some restaurants produce!  Cleotrasha is wearing a frock made from red plastic kiddie drink lids, courtesy of a chain restaurant in Olympia (who donated them to a local school, which gave them to Ruby rather than throw them out); it is held together by zip ties left over from some construction project.  Everyone should know by now that plastic is unhealthy for children and other living things, so why are we continuing to produce and consume all of this plastic?  Her necklace was created out of empty scotch tape spools (leftover from an art project when Ruby was an artist-in-the-studio at the Museum of Glass), and her hat is a combination of a cottage cheese container, another kind of plastic lid, and vegetable netting.  Only the cottage cheese container in acceptable in the curbside recycling bins of Olympia; the rest is just rescued trash. 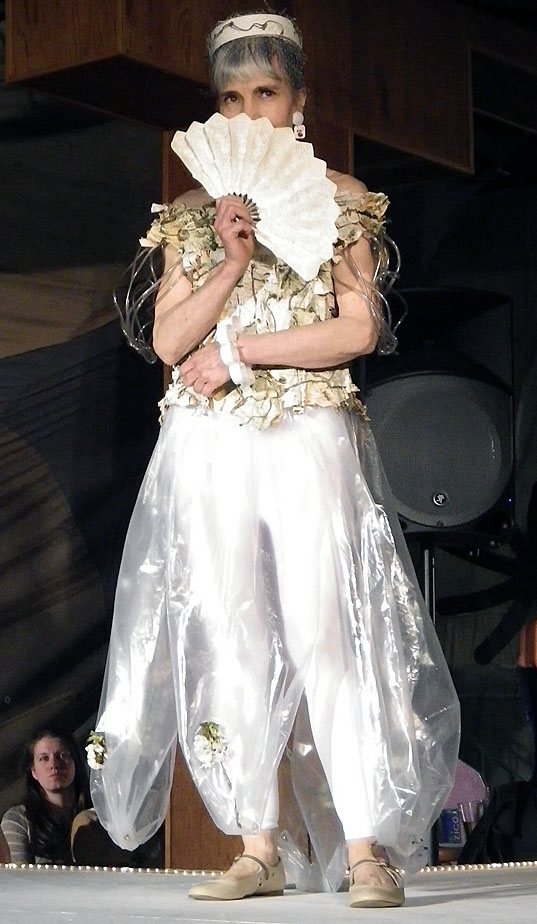 A Whiter Shade of Trash by Ruby Re-Usable and Revivre (Laurette Chasse), photo by Funki Sock Munki, modeled by Revivre

Revivre, being a year round gardener, believes that everything gets to live again, whether in the worm bin, the compost heaps, the greenhouse or on the runway.  Modeling an urban gardener lifestyle, she is wearing a dress made from used gardening materials, embellished with fruit tree prunings, birch bark and detritus found around her Ballard neighborhood.  While Western culture considers white the color of bridal purity, Ruby and Revivre know that it is also traditionally related to death and mourning, where death usually means the end of one life and the beginning of another, moving forward to a new life.  Here they reincarnate debris to create “A Whiter Shade of Trash.” 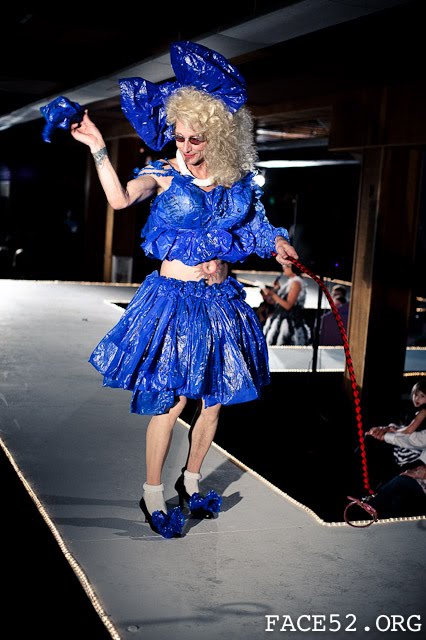 Lana Landfill despises plastic bags, but she enjoys having the New York Times delivered, nice and dry, in those beautiful blue plastic bags, which she of course saves for reuse and/or recycling.  And being a responsible pet owner, she always picks up after her pooch: not only is it common courtesy, but unpicked up poop washes into storm drains, which flow directly into streams or ponds and cause a host of water quality problems. It“™s not only a filthy situation; it“™s also unhealthy for people and the environment!  So Lana is never without a plastic bag when she walks her dog, especially when she wears this two piece ensemble by Ruby Re-Usable, made entirely out of plastic bags.

View an hilarious short video of Lana in action HERE

Have a question about plastics recycling?  Go to the Seattle Utilities Recycling website