Olympia Dumpster Divers is proud to read about our own Bil Fleming in the pages of the Olympian; we have reprinted the article here so as to spare you from having to view those hideous ads about varicose veins. (ps Bil was born with two “L’s” in his first name, but in his effort to reduce waste, he has voluntarily given up one of those “L’s.”) 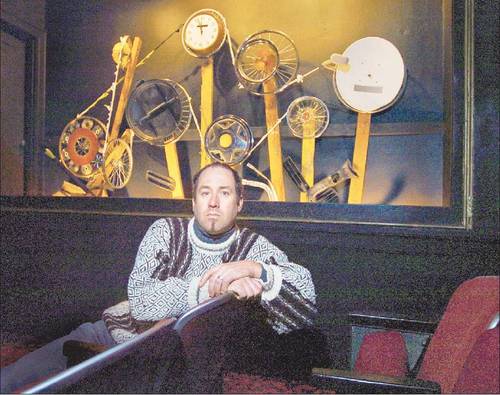 From Waste to Art: Bil Fleming molds objects into a thing of beauty by Molly Gilmore

Fleming, who created the installations on view in the niches (known as gardens) that flank the stage of Capitol Theater, works in a variety of forms – creating lamps, sculptures, drawings and picture frames – but it’s rare for him to use materials other people haven’t discarded.

One of the installations, “The Projectionists’ Gardens,” is an assemblage of flowers/gears made from bicycle wheels, 2-by-4s and other cultural artifacts such as a satellite dish, a clock, a trash-can lid and a child’s plastic hard hat. Strips of plastic shopping bags form a belt connecting the bicycle-wheel gears. Gears turn when the viewer pulls a lever at the front of the piece.

The other, “Reverse Psychology,” masks the niche and bears signs warning the viewer not to look or touch. The idea, of course, is to find out what happens when people disobey, as they so clearly will.

“The brilliant concept of the pieces is that the audience has to participate, be a part of the art, make it come to life,” said Audrey Henley, the theater’s manager. “At a recent show with Jason Webley and a performance by Brothers from Different Mothers, the reaction of the audience put a smile on my face. People would laugh, clap and play with both pieces right up until it was show time.”

All of the materials Fleming used for “The Projectionists’ Gardens” were salvaged, except the lock nut that ensures the lever stays belted on.

There’s nothing new about recycled art – not on a broad scale, and not for the artist himself.

“Art from reused materials is probably older than art from new materials,” he said. “Even before tramp art, aboriginal peoples would go back to the junk pile when they needed something. They could go back and use their trash like a library.”

And finding the value in what’s been cast off runs in the family.

“I remember my mother stopping on the way to take us to school because she saw a stereo amplifier in someone’s garbage,” he said. “Mom was way into music and didn’t have a very modern stereo. She pulled it out of the trash to see if it would work and it did. It worked great. That made a big impression on me.”

Fleming’s passion for reusing rather than buying helped inspire “Garden,” which makes a statement about the fruits of consumerism – and another about the challenges of working with salvaged materials.

“A lot of materials are leftovers from construction projects,” he said. “I had 2-by-4s, but they were ratty. I rode my bike around the neighborhood and found a dozen 2-by-4s by the side of the road, all brand new.”

He installed them as the stems of the flowers, but then rethought it.

“I said, ‘No one’s going to believe those are salvaged,’ so I didn’t use them,” he said. “I wanted it to come through that what was being used was waste.”

“Reverse Psychology,” which is much simpler and starker, tempts the viewer to peek through a hole and turn a crank – by forbidding those very things.

“It scares a lot of people. You fall for the concept, not realizing the consequences,” Henley said. “You really have to experience it yourself to understand it.”

The sculptures are interactive and include sound, motion and light – fitting because Fleming is best known for his lamps, made of reused and salvaged materials, including kitchen utensils, car parts and plumbing parts. A tin lantern that casts patterns on the theater wall is a part of “Reverse Psychology.”

“I put them together into assemblage sculpture that usually has an interactive on-off switch – a lever or a funky dial, some sort of curious means of turning it off and on,” Fleming said. “I try to play around with the light they create.”

He also creates collages, does digital photography – which doesn’t involve a lot of reuse or recycling but does promote his philosophy of finding beauty in the old and imperfect – and makes practical objects such as shopping bags, cutting boards and picture frames.

“They aren’t art frames,” he said. “They look like you could have bought them at Target. I started making them as a response to someone’s criticism that my lamps were too expensive. They said recycled stuff should be available to everybody.”

Besides Capitol Theater, where his installations will be on view through Dec. 28, Fleming’s work can be found at the Black Front Gallery, Radiance, Harmony Antiques and Whirligig. And at Duck the Malls, an alternative shopping event Dec. 9 at Capitol Theater, he’ll offer wreaths made of ivy he’s been pulling out of his yard.

Art is Fleming’s primary occupation, although he also does some maintenance on an apartment building he owns. And he’s a stay-at-home dad to Haidn, 12, in sixth-grade at Washington Middle School, and Teal, 8, a second-grader at Lincoln Elementary.

“With the kids both in school full time, I have more discretionary time to put toward just working on art,” he said. “But then there are the errands and doctors’ appointments and everything else that goes along with having kids.

“So it’s great that my schedule is flexible. That’s a big benefit of being an artist.” installations

What: “The Projectionists’ Gardens” and “Reverse Psychology,” interactive site-specific installations by Olympia artist Bil Fleming, provide more entertainment in historic Capitol Theater before and after movies and shows.

Tickets: There is no charge to see the installations, but they are on view primarily when the theater is open for events.

Information: For theater information, call 360- 754-5378 or go to www.olyfilm.org. For details on Fleming and his art, go to www.bilfleming.com

U p next: Diane Kurzyna will be the next artist to display her work in the spaces that flank the stage.