Ruby Re-Usable is going to take a little blogging break, but not before she posts about Art on the Ave this past Sunday, and also some of the sites that you should check out at least once this summer.

Claudia Riedener and Lynn DiNino convinced me to participate in the 9th Annual Art on the Ave event; I am not a crafts fair selling type with a pop-up booth, so I was hesitant about having to schlep all the way to Tacoma for this. But this was not some generic same old same old street fair, not when Lynn is orchestrating Chaos Into Order.

I was recruited to be one of the “Artists in Action,” which I took

heart, setting up a little table with some City of Tacoma pamphlets on waste reduction and a sign saying Make Art Not Waste. Four of my plastic bag and tape sculptures were also there, and I spent the day asking passersby to be part of the action by escorting one of the sculptures around the fair. Over two dozen men, women and children wheeled these figures up and down 6th AV; I wish I could have made a video but instead I took pics of them and also gave each participant a Make Art Not Waste postcard.

of the artists who are part of the EnviroHouse Recycled Art exhibit stopped by to say hi: Barbara De Pirro, who crotched the plastic bag hat that Wonder Woman on Wheels is wearing, and Holly Senn, who, along with her partner Amy Ryken, took Wonder Woman for a stroll. There was lots of interesting stuff to do and see (and eat and drink), but I was so busy with my activity,

I missed most of it. Kelly Lyles and some of her Art Car cronies were there, including Pissed Off Patriot David Crowe, who wished the Art Cars had been place with the artists instead of with the other cars (which he referred to as “the shineys”) . I intend to be there for the 10th Art on the Ave, as an artist or just an observer, either way it will be worth the schlep to Tacoma, and you should do it, too.

Don’t forget to look at the Olympia Free Wall with enpen.

Read this Streetsy discussion of the LA Times article: Street Art v Graffiti and think about what RubyMae (not to be confused with Ruby Re-Usable) says: “Street Art for me is half about the art, and half about being a spastic attention whore who enjoys pissing people off…”

Take a closer look at what we throw away with Everyday Trash, then check in with Mother of Many and view some cool recycled art sites. 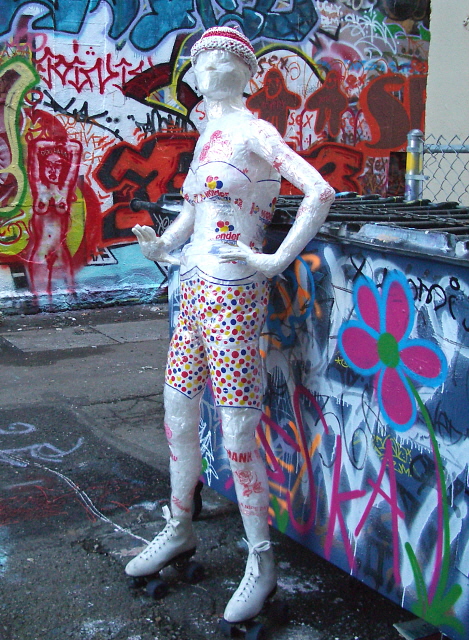